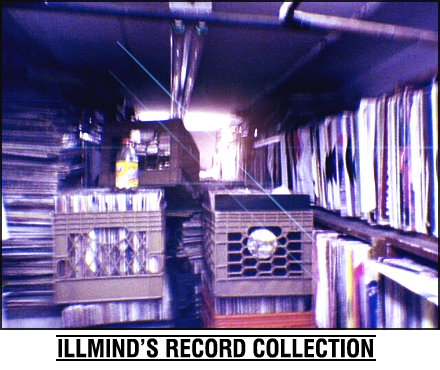 illRoots: Hip-Hop is constantly evolving as we see different genres such as Rock and Electronica making strides to integrate more into the genre, what is next sound to look out for?
Illmind: I honestly couldn't tell you. I guess we'll all have to wait and see.
illRoots: One artist that you could work with, that is alive, and not necessarily "Hip-Hop", that you would love to work with?
Illmind: I can name a ton of emcee's, so i won't pick an emcee [Laughs]. I'd have to say Stevie Wonder. Incredible, incredible artist & I grew up on his music. If i had the chance to be in the studio with him, I would probably just bring a pad and pen and sit there and take notes! Probably a video camera too haha.
illRoots: Over time what was the hardest time in your life?
Illmind: Career-wise, I'd have to say when i first decided to drop everything and go music full time. The struggle is where it starts, and I was dealing with a lot of pressure from my family, friends, and people doubted me. Not to mention financial issues as well. That's just part of the game.

illRoots: I have just one more question to ask before we wrap things up. It seems like in every interview everyone always asks who influences you in your life, but if I were to flip that "How can Illmind influence Hip-Hop?
Illmind: If I were in any way an influence, i would want my music to influence people to channel their music from raw emotion. When you hear music that you love, there's always that "it" thing about it that you can't explain. That feeling you get when you hear it and it never goes away. I get that feeling when i hear Dilla's music. You can tell that he makes music from his soul. When I'm in the studio creating music, for whatever genre, the ideas always come from a feeling. If you make music that you can't feel, then what's the point?
For More info on Illmind check out his Myspace: www.myspace.com/illmind
SPONSORED BY:
COMMENTS