I can remember the first time I heard Encore like it was yesterday. It was Friday, November 12th, 2004; George Bush had (kind of) just been re-elected, I was eleven years old and just about the biggest Eminem fan in the world. I didn’t have any money, and my friend Matthew from down the street came over to my house to play video games; or whatever it is that eleven year olds and thirteen year olds do on a Friday. He, unlike me, had $13.99 to spend and bought the album in question, but didn’t seem too thrilled: “Hey man, you can honestly have this shit if you want it. I’m not keeping this, it’s terrible,” he told me. He really gave it to me; I just figured Christmas came early.

Eminem was coming off of the critically acclaimed Eminem Show, and the 8 Mile movie & soundtrack, so I could only imagine that expectations were high for the proverbial “encore” to the show. But when it leaked (as the legend has it, I was too young to know anything about album leaks), it was apparently so bad that people thought it was a fake created to throw people/bootleggers off from what the album really actually was. I wasn’t trying to hear it…you couldn’t tell eleven year old me shit. As far as I was concerned, Encore was just as jamming as the first three albums. I got older, and as I got older and the blinders of fandom began to wear off, I started agreeing with everybody else: that Encore was a terribly bad mistake in a catalogue full of work that didn’t deserve to be placed next to it. But now that I’m even older than I was when I came to that conclusion, and now that we know more about that time period in Marshall’s life, I revisited Encore and came to a lot of new understandings that eleven year old me could’ve never wrapped his mind around, including that Encore may unequivocally be Em’s weakest effort, but it may also be his most interesting. Here’s why. Is it me, or are some of the beats on here some of Em’s best work? If not his best, then at the very least, his most eclectic self-production takes place right here on Encore. Eerie dark tunes like “Spend Some Time” & “Like Toy Soldiers,” as well as “Crazy In Love” turn otherwise poppy bright records and turn them into spectral, ghoulish almost sinister music. “Mockingbird” is like the aloof, looming, esoteric doppelganger of “Hailie’s Song,” and “Mosh,” as overcast and as shadowy as it is, still manages to make me want to go outside and start a revolution, or at least fight somebody. Pay attention to the recurring theme here, it’ll pop back up later. And while we’re at it, although they aren’t self-produced records, “Encore” and “Rain Man” have got to be two of my favorite Dr. Dre beats ever.

Although most consider this to be Eminem’s worst album, if it counts for anything, other than the production noted earlier, I think this album has the best and the most telling artwork/packaging of any of his work once you analyze it. You can really begin to put into context where this guy’s head was at for this process if you look at the art. Off rip - let’s start with the CD itself. The disc features a sheet of lined paper and what I could only imagine to be a suicide note, stating “To my family and all my friends…thank you for everything. To my fans, I’m sorry. Marshall.” Let’s also not leave out the fact that theres a bullet laying on top of the piece of paper. The booklet continues this theme, including the back of the book that offers a rear view of the front cover, revealing that Em is holding a gun behind him while he bows. The pages start off with imagery of Em doing what any rapper does before a show: sitting backstage, getting their clothes together, writing a suicide note and loading bullets into a gun. Normal stuff, right? If you think that’s weird, it gets weirder.

Following that, the art gets even darker. He’s shooting the crowd, there’s blood on the pages. There are bodies everywhere, all thanks to our star of the show. The insert behind the disc is a picture of Eminem putting a gun in his mouth, and the now iconic curtains on the front of the album aren’t red, they’re a creepy, ominous dark pale blue. I think the lesson here is, it’s a dark time in the life of Marshall Mathers. I always like to put things, especially rap albums, into context and analyze why something is the way it is rather than just taking it at face value. The art is a perfect introduction into why the album sounds the way it sounds and the videos take it a step further. The “Mosh” video is as dark as it gets, even though it’s just a cartoon, and I can’t fathom what it did to Em’s psyche to make a video like “Like Toy Soldiers” about how all the beef could lead to him losing a friend like Proof to murder, and for it to actually come to fruition (even though it didn’t occur until 2006). Almost just as visual as the artwork itself, are the interludes that take place between songs. 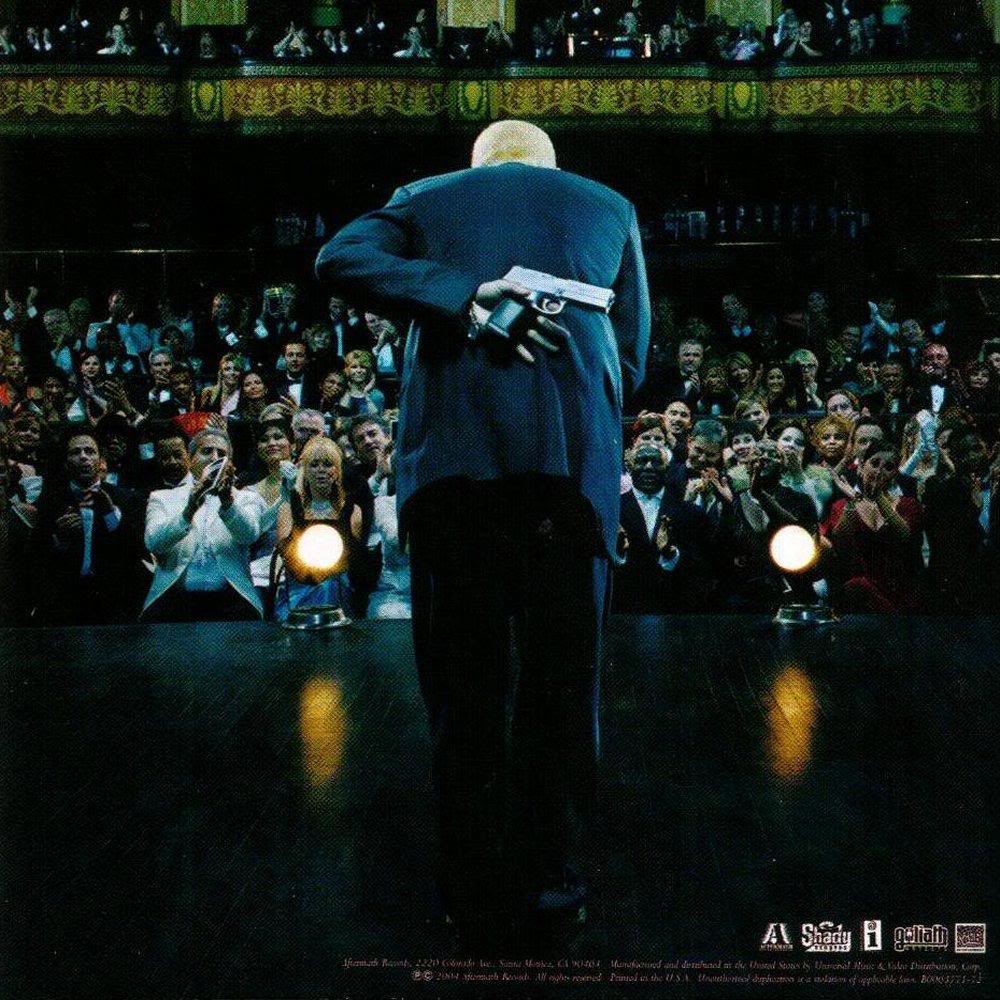 I think I learned the most about this album from paying attention to the skits. The skits follow through the night of a show, and begin with the curtains being raised just like the album prior. This time the fans are chanting his name and asking him to come back…which kind of made me feel like that was his way of saying “I’m coming back out one more time because this is what you greedy motherfuckers want.” He lets a shot off after “Evil Deeds” and says to himself, “Last one baby, let’s go.” Paul calls like he does on every album, to tell Marshall about The King of Pop’s reaction to the "Just Lose It" video, and to ask him about a new gun he heard that Em bought. The undertone of the album is almost just as much about this gun and these bullets as it is about Em himself. This time around Eminem calls back (Em Calls Paul [Skit]). Now this was kind of alarming. The skit started off kind of funny…Eminem using Michael Jackson references to retort to Michael’s disenchantment with the video…but it got unfunny fast. I’d explain it here but…go listen to it. There’s no words for how unfunny and awkward it gets when Marshall starts talking about how he wants to touch Mike and starts making random weird noises.

When I was eleven I thought it was funny, but now that I know the type of drug addiction he was dealing with after becoming dependent on Ambien during the filming of 8 Mile (people knew he liked drugs, but nobody knew the specificity and the extent until he got clean), and the fact that it lead to a chronic, hyperbole-like addiction to Valium and Vicodin, who knows what amount of drugs he was on when he made this shit. It’s kind of sad and pathetic in retrospect. After the last song, he takes that gun and those bullets I keep writing about and he acts out the booklet, murdering the entirety of the same crowd that was chanting his name, then killing himself. That’s not just a skit, it’s a message, whether it was subconscious or not. There’s also a few things to take note of within the songs themselves...

(On a sidenote, I don’t know if he planned this or it just worked out that way, but the chronology is kind of genius. At the end of Encore he says “See you in Hell, fuckers” and on his next album Relapse, when he acknowledges that people ask him where he’s been he says he was underground…The Re-Up came out in 2006 (The intro being titled “Shady Narcotics”), then the Relapse, (Detox), Recovery…Whatever. I’ll stop rambling.) Most of Em’s work is very personal, and The Eminem Show to this one is a great example of that -- Encore carries on the tradition (at some lengths), but in a very different capacity. Songs like “Spend Some Time” & “Crazy In Love” are about his ever tumultuous romantic life…but they don’t seem to be songs about Kim, oddly enough. The songs are still dark and as twisted as always. He opens up about his earlier years on "Yellow Brick Road", talking about meeting Proof & the racism he dealt with being a white kid in love with a black culture during the era of X-Clan and Black Power and how that paradox lead to the infamous racist “Foolish Pride” song Benzino tried to exploit. We’d seen him get a little political before with “Square Dance,” but never really as explicitly as on “Mosh” or “We As Americans” where he lets us know he “doesn’t rap for dead presidents, (and would) rather see the president dead.” This is the more normal side of the album.

(Sidebar - On Curtain Call (which, if that title doesn’t make you think he thought it was over, then I don’t know what will -- people don’t usually do greatest hits at the beginning of their career), the song “When I’m Gone” takes shape as an amorphous, in and out of reality narrative about his crumbling family life that once again leads to a symbolic, bullet inflicted suicide. I love that record, but it’s another example of Em’s mindstate in 2005.)

Now I know I’m trying to do the whole alternative perspective thing…but let’s be real: songs like “Ass Like That,” “Just Lose It,” “Big Weenie,” and “One Shot 2 Shot” are just cringe-worthy and hard to listen to, albeit kind of funny in a “laughing at you, not with you” kind of way. Okay, maybe sometimes I like “Just Lose It” because it’s so bad that it’s actually kind of alright. Don’t judge me. Here’s a fun fact: When Z100 premiered this record on the radio, my father and I didn’t even recognize Em, we thought it was Craig David. There are some nice rhymes on “Weenie” and “My 1st Single,” but that doesn’t keep them from being terrible. What the fuck was this guy talking about? How far gone do you have to be to make a song like “Ass Like That,” really? It’s to the point where I legitimately feel bad, because it’s not just a crappy song. This guy was really on the brink struggling with pills, you can hear it. Drug addiction is no joke, and it shows with how bad some of these records are. The point here is, don’t listen to the wack records and think they’re just wack records; put it into context. Like I said earlier, this isn’t only an album that people consider bad, it sounds to me like a drug addict’s self loathing, “what the fuck is this superstar life that I’m in,” “it feels like my career is moving too fast, I need it to come to a halt,” “this beef is tearing our lives apart,” “my family is coming undone,” “I won’t admit I’m fighting a fatal drug addiction” cry for help manifesting itself in a 20 track CD.

More relevant to the topic of the music itself, this isn’t a horrible record by any means. It has some bad songs, but it also has some great ones. Eminem’s trademark lyricism is on here too (for the most part), and I think a lot of people flat out don’t acknowledge that. Shit, if you take off “One Shot,” “Weenie,” “Ass Like That,” and maybe “Just Lose It,” and replace them with “We As Americans,” “Love You More” and “Ricky Tic Toc” off of the bonus disc, you’ve got a damn good body of work.