Child Rebel Soldier was doomed from the beginning. A collective featuring Kanye West, Pharrell Williams, and Lupe Fiasco seemed too ambitious to actually work, and though they released three songs over the course of three years, that ultimately proved to be true.

The group was introduced to the world on Kanye’s Can’t Tell Me Nothing mixtape in May 2007. Alongside “Can’t Tell Me Nothing” and a snippet of “Stronger” was “Us Placers,” the first song from CRS. Each member rapped a captivating verse over Lupe’s minimal, Thom Yorke-sampling production. The three were so in sync; there was no question that they would eventually realize the full potential of such a strong idea, and the hype was palpable. Later that year, Lupe told Billboard their labels were working out an arrangement for the trio to release music together officially. “Everybody is excited,” he added. He was correct.

Anticipation furthered during another interview in April 2008. Lupe told MTV, “We don’t know if there’s going to be an album from CRS, what CRS is going to be. All I know is we’re going to debut a piece of CRS on the Kanye tour.” The momentum continued when Kanye, Lupe, and Pharrell hit the road together for the Glow In The Dark tour that same month. During the tour, Child Rebel Soldier released a remix to N.E.R.D’s “Everyone Nose.” Once again, their combined energy was a creative success and the song was well-received.

Then there was silence. Nearly two years passed without any word on the status of the collective, but in early 2010, the possibility of a CRS album was reignited. In an interview with Invasion Radio, Lupe told DJ Green Lantern that the group had four songs completed. Later that year, they released one of them, “Don’t Stop,” as part of Kanye’s G.O.O.D. Fridays series. Just over a week after that record dropped, Kanye continued to the give the masses hope, telling an audience at a Runaway screening in Los Angeles that a CRS album was on the way after My Beautiful Dark Twisted Fantasy and Watch The Throne.

Hope for new music from the supergroup has since dissipated. Earlier this year, Lupe told Katie Couric that despite the fact he, Kanye, and Pharrell had a few songs and ideas for the packaging of a CRS album in place, the project was on “the backburner of backburners.” There was an opening for slight optimism when Lupe merely said he didn’t know if CRS would ever release more music. That window of opportunity closed when he tweeted, “The CRS group is cancelled. Done. Not happening. Stop asking,” the next month. 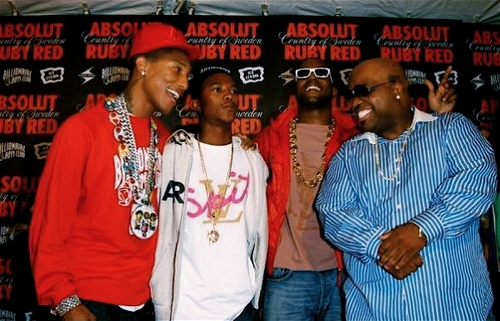 Now listeners are only left with speculation about what might have been. What was once poised to be an effort of grand proportions will go down in history as something of an urban legend, a blip on the musical radar that never amounted to much. However, the sheer concept of Kanye, Pharrell, and Lupe working together as one and the bits of music that they did release remain fixed in the conscious. CRS may be gone, but they’ll never be forgotten.